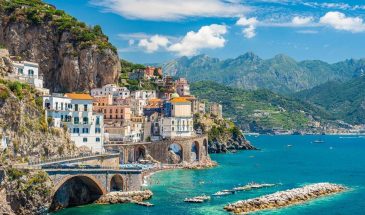 Amalfi Coast
Magically suspended between the blue sky and the iridescent colored sea, the Amalfi coast seems to be born from the palette of a painter who wanted to use the warmer color gradients for creating a landscape that enchants the visitor at the first shot, giving a thrilling experience and such evocative view to doubt, for a moment, it is real. It is the land where the sweet scent of lemon blossoms harmonizes itself with the most aromatic one of the Mediterranean vegetation and the acrid aroma of saltiness; where the brilliant colors of the majolica domes, bougainvillea and carnations pergolas give an evident colored touch to the typical whitewashed houses, clinging to the last offshoots of the Lattari Mounts that plunge dramatically into the sea.

A vertical landscape, in short, characterized by a picturesque labyrinth of stairways and narrow alleys, connecting the two main elements of this landscape: the mountains and the sea. A continuous succession of headlands and inlets, bays and fjords, interspersed with pebbled beaches and rocks on which you can still see the ancient viceregal towers, the first bulwark of the local population against the Saracen attacks.

The shift from the sea to mountain is seamless: the mountain sides were terraced over the centuries, shaped by human labor to create flaps of arable land and already compared, during the Renaissance period, to the legendary Hesperides by the Italian writer and naturalist Giambattista Della Porta. All the towns of the Amalfi coast are connected by the scenic SS. 163 road, built in the first half of the XIX century during the Bourbon period and always considered one of the most beautiful road in Italy.

Following the natural course of the coastline, the route is full of curves, nestled between the rock and the sea cliffs, giving new and spectacular shots at the exit of every tunnel or hairpin bend. Before the construction of the coastal road, locals reached all the towns via mule tracks and footpaths, still existing and particularly appreciated by trekking lovers for the stunning views that can be enjoyed.

**Please note, these adventures are planned far in advance, and sometimes things come up that are unforeseen or unplanned. With that forethought, know the group will be accompanied on this adventure by Keith, or Michelle, and/or My1FitLife Ambassador.

There are no questions matching your query or you do not have permission to read them.

Welcome Dinner Arrival day in Naples Arrival at Capodichino Airport at any time and transfer to your Hotel in Naples. Welcome group - dinner in the Pizza’s world capital. No activities planned for today until a group meeting around 6 :30 pm. If passengers arrive earlier they can enjoy the city. Hotel is right on the sea side, in the heart of Naples. Dinner at a local restaurant/pizzeria.

Pompei and Transfer to Amalfi Coast

Pompei and Transfer to Amalfi Coast Enjoy a typical continental breakfast at your hotel. After breakfast, private transfer to Pompei to enjoy a guided tour by an archeologist of this Unesco world Heritage site. After the tour we’ll travel to the Agriturismo nestled above the hills of the Amalfi Coast. A true paradise immersed in a magical atm osphere, surrounded by colorful gardens, lemon groves and vineyards facing the beautiful seaside. This converted 17 th century monastery will be your home for whole week until departure. At the Agriturismo, you will enjoy the first of many delicious home - c ooked Italian dinner s by Michela and Nicola, your hosts

Amalfi and “Le Ferriere” Hike Enjoy a traditional Italian home - made breakfast at your hotel. Hike to the Valle delle Ferriere, the first of several hikes in this beautiful part of Italy.

The bustle of the Amalfi Coast is only a few miles away, but, away from the crowd, we have the chance to savor the quieter surroundings. Take the "Valle dei Mulini" route for approximately 1.5 hrs up and along a path and some stairs towards the beautiful V alle delle Ferriere National Park. Free time for lunch and afternoon to fully enjoy the charm of Amalfi. Return to the Agriturismo in the afternoon. Dinner at the Agriturismo.

LE FERRIERE HIKE | 7 km ( 4 m i) → 3 hrs → elevation gain 250m (700ft) The bustle of the Amalfi Coast is only a few miles away, but, away from the crowd, we have the chance to savour the quieter surroundings. Take the "Valle dei Mulini" route for approximately 1.5 hrs up and along a path and some stairs towards the beautiful Valle delle Ferriere National Park. The route goes up alongside the Rio Canneto and ends at some beautiful waterfalls .

Please note that hikes are accessible for all travelers, but there can be sections that are more strenuous and challenging due to terrain. All along the Amalfi Coast there are many sections of staircases, because the area has been developed on the mountain s. Please ensure you have proper hiking footwear . Walking sticks recommended

Ravello and Wine Tour Enjoy a typical continental breakfast at your hotel. Transfer to the town of Ravello in the morning. Enjoy a visit of the beautiful town and one of the famous villa’s gardens. The town has a very peculiar history: it was founded slightly behind the coast , on a hill, as a safe harbour against the barbarians. After the barbarian invasions, Ravello has become a very important town in the Republic of Amalfi. Ravello has also been a famous destination for artists, writers and musicians, like M.C Escher, Richar d Wagner, Greta Garbo, Gore Vidal, Truman Capote, Leonard Bernstein and Virginia Woolf.

After Ravello, we will travel to Tenuta San Francesco, a family run winery where we will learn all about the wine production of the area. Lunch and tastings included. Dinner at the Agriturismo.

Walk of the Gods" Hike"and Positano

Enjoy a typical continental breakfast at your hotel. Set off on the famous "Path of the Gods" along the Amalfi Coast, finishing up in quaint Positano. Set off from the small town of Bomerano and follow the path along the Amalfi Coast with sensational views of lemon groves, gorges, deep valleys, woodland, abandoned farmhouses, and the sea below. Stop in the towns of Nocelle and Positano, where there is more to explore. In the afternoon, t ake a scenic ferry ride to admire the beauty of the Amalfi Coast from an alternative perspective , then return to the Agriturismo for dinner.

THE PATH OF THE GODS | 10 km (6 mi) → 5 - 6 hrs → elevation gain 400m (1000ft) The hike is 10 km (6 miles) in total, and it will take approx 5 - 6 hours, from the Agriturismo all the way to the end: Positano. The main section of the hike is 7 km (4 miles) between the small villages of Bomerano (in Agerola) and Nocelle (above Positano). Both these villages are above the sea, so there isn’t a huge change of elevation between them. The hike is of moderate difficulty , and the most challenging sec tion is the first 1,5 km (1 mile), from the Agriturismo to the town of Bomerano, where some part of the trail is steep and rocky. Once in Nocelle you would need to walk down by staircases of about 1500 steps.

Day trip to Capri Island After breakfast, transfer to Amalfi and take the ferry boat all the way to the legendary island of Capri , one of the most picturesque and visited locations in Italy . The island has a mythical charm, as well as its natural treasures, through the writings an d legends of Ancient Greece. Its breathtaking landscapes and beauty stretch from the rocky caves around the island to the edge of the horizon, and has been an inspiration to poets, lovers and travelers throughout the centuries. The island is composed of tw o municipalities: Capri and Anacapri , each with their own administration and touch of regional rivalry. The latter is built on a high plateau, affording staggering views of sheer cliffs from dizzying vantage points. Go further, e njoy a funicular ride to the top of Monte Solaro above Anacapri. The most elegant and charming island of the Mediterranean awaits. Dinner at the Agriturismo.

Mozzarella and Limoncello show + Pizza making experience Today you will deep dive into the culinary traditions of the region. We will visit a small dairy farm to see how they make the most famous mozzarella in Italy . Then we’ll go to a local family run distillery to learn about the king of the Italian liquors: Limoncello! In the evening, put your hands in the dough while a local pizza maker will show you all the secrets and technics behind the perfect Pizza! The best way to celebrate your week in the Amalfi Coast! Buon appetito!

Departure Day After breakfast, transfer to Naples’ Airport and Farewell!

There are no reviews yet.

Be the first to review “Amalfi Coast Italy” Cancel reply

You can take anyone into the gym and motivate them to live fit for a day, but if you take them into nature, you can inspire them for life! That’s the motto of Michelle Steinke-Baumgard and Keith Baumgard from My1FitLife. Six years ago, Michelle and Keith joined together and started what has become much more than just a fitness company; they have created a tribe, a community and a feeling that inspires you long after you leave their retreats. Michelle and Keith take fitness up a notch and remind you that living fit is not about making your body smaller, but instead, fitness is about making your life BIGGER!!! When you come for a retreat with My1FitLife you will accomplish big things; you will learn to be brave, to explore, to stretch your boundaries and to live your life to the fullest.